Buhari Cries Out To Fashola Over Bad Roads

A member of the National Assembly, Dr. Abdulfatai Buhari, has sent a Save Our Soul (SOS) letter to the Minister of Works and Housing, Mr. Babatunde Fashola over the deplorable state of Oyo-Iseyin and Igbeti-Ilorin Roads.

Buhari, who represents Oyo North Senatorial District under the platform of the ruling All Progressives Congress (APC), requested urgent actions from Fashola to fix the two roads within his constituency.

Our correspondent learnt that Buhari, a native of Ogbomoso, is the Chairman, Senate Committee on Land Transport.

The former Commissioner for Local Government and Chieftaincy Matters in Oyo state in his letter entitled, “Reconstruction of Oyo-Iseyin and Igbeti-Ilorin Roads” which was addressed to Fashola on Wednesday, said that he wrote the letter due to hardship his constituents face on daily basis on the roads.

DAILY POST gathered that apart from the terrible state of the road linking Igbeti to Ilorin, Kwara state capital, a major bridge on that route has collapsed making it difficult for motorists to move freely.

Buhari in the letter made available to DAILY POST on Friday in Ibadan, the Oyo state capital said that the two bridges that linked Oyo and Kwara states from Igbeti has already collapsed, a situation which is affecting economic activities in the area negatively. 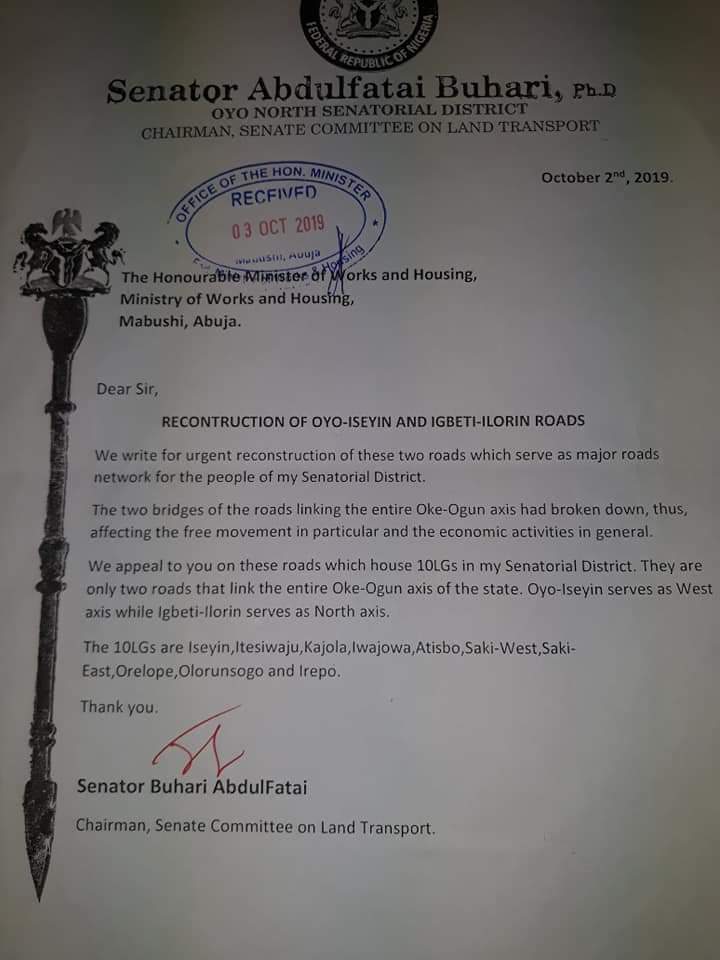 He said in the letter, “The two bridges on the roads linking the entire Oke Ogun axis had broken down, thus affecting free movement in particular, and the economic activities in general.

“We appeal to you on these roads which house 10 LGS in my Senatorial District. They are the only two roads that link the entire Oke Ogun axis to the state. Oyo /Iseyin serves as the west axis, while Igbeti –Ilorin serves as the North Axis.