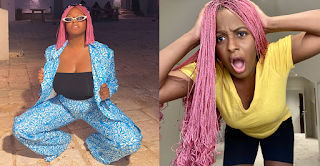 Okay, me and my friend were co-incidentally talking about the topic of weight earlier this morning. Why is it that as a people, especially as Nigerians, we’re always very quick to call out and criticize people for putting on weight, while at the same time giving them fatty foods like puff puff and meatpie in parties, and if they refuse to eat it, we’ll still be the ones to say “Ah ah, why you no dey chop?”

Nigerians will make people feel insecure and when people reply or open up and say that they’re insecure, it is these same Nigerians that will still say, “What is this one feeling insecure about? She has not seen people that will kill for the body she has.”

Yes, I know this is not a uniquely Nigerian thing but it’s just something my friend and I were discussing earlier today and something that ties perfectly to today’s story.

So today’s story is about Nigerian top DJ and billionaire daughter, DJ Cuppy.

DJ Cuppy is very prevalent on Twitter and she’s been promoting and sharing her new studio album all across that platform while also of course sharing pictures and videos of herself through social media.

One commenter then took to DJ Cuppy’s Twitter after looking at some of her pictures and wrote in a now deleted tweet,

Is it just me or is DJ Cuppy getting uglier and fatter?

I’m sure he didn’t think Cuppy will read it or reply to it, but she did.

And you see the thing about these Internet warriors, a lot of them are cowards – because the minute the backlash came upon him (the person who wrote the tweet), he immediately deleted the tweet. Just one second of fame and see how people are already shaking and deleting tweets, yet he’s still the person that will be so bold to go and be writing rubbish on people’s page.

BUT…apparently, the tweeter above wasn’t the only person who had been remarking on DJ Cuppy’s weight gain.

Cuppy shared a picture that compiled a list of tweets she had been receiving. The tweets included:

DJ Cuppy you’re getting fat ooo. Don’t come and be fat like one pig

Cuppy is growing too fat

Cuppy you are getting fat i used to crush on you as the prettiest female act in africa,, but not any more, i u back to your sweet self..

Even just below that tweet that she posted, people still carried on. One user said, under the tweet above:

Not hate cuppy but they are just telling you the real truth about your body stature And the last one they did’t say, your actually getting old gradually

Nawa oh! Could you imagine being a celebrity and having to read this every single day and night. How won’t somebody develop body image issues?

Anyways, DJ Cuppy posted that picture above and wrote as a caption:

A few comments I noticed RIGHT HERE on Twitter… #FreeCuppy

She then continued on to post this picture of herself:

With it, she wrote:

NGL I have PUT ON WEIGHT! My Priority- Health? Yes. Weight? No. Said it last year and I’ll say it again… SUMMER MONEY OVER SUMMER BODY! #CuppyDat

If the woman is fine with her weight, then wetin be the problem? Can’t person just be as they wan be? If this woman now comes and says “Oh, I have body issues or I’m insecure about my weight”, you already KNOW that the comments will fly in saying: “Sit down Cuppy”, “What is she insecure for?” “With all that money, somebody should come and give me her insecure oh”, “Ehn, then she should lose weight na…”

I hope you’ve liked the story.