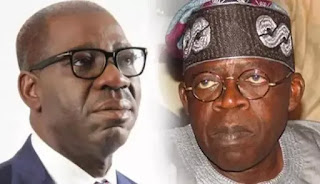 One of the most respected Nigerian politician and a member of the All Progressive Congress (APC) has told the Residents of Edo not to vote for the candidate of the PDP.

According to report, Bola Ahmed Tinubu, the chieftain of the APC has said that Obaseki, the candidate of the PDP does not deserve to be re-elected on September 19 due to the way he handled the affairs of Edo state.

This statement was made today on the TVC broadcasting station. According to Tinubu, he said Obaseki is not worth the votes of Edo People not deserve it in anyway.

He said Obaseki does not know what democracy is about and he was not there when the struggle for democracy began in the 1990s. He said Obaseki should be voted purdue to his inability to appreciate democratic institutions.

Tinubu also talked about the inauguration of Edo Lawmakers and the inability of Obaseki to provide justice by inaugurating the lawmakers that was duly elected by the people.He also said Obaseki disobeyed those who advised him to inaugurate the lawmakers and that he Even went ahead to demolish some part of the state assembly to prevent the lawmakers from executing their functions.

what do you think about this recent development?