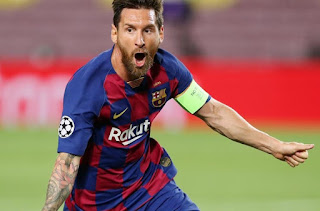 Captain Lionel Messi of Barcelona faces a defining period in his career as a football player, with fresh reports claiming he will make a U-turn over his decision to leave the club

Messi ‘s father and agent, Jorge, met with the President of Barca, Josep Bartomue, on Wednesday.

The meeting was reportedly concluded in a stalement, with no agreement reached over the decision of the 33-year-old to leave the Camp Nou.

Messi’s camp insists the six-time winner of the Ballon d’Or can leave this summer for free, while Barca claims the date has passed for his exit clause.

TyC Sports claims Messi is considering a dramatic U-turn and seeing out his current contract year.

Senior figures in Barcelona are understood to have pleaded with Messi to stay, and that he will spend Thursday considering his options, but he is “90% likely to stay.”