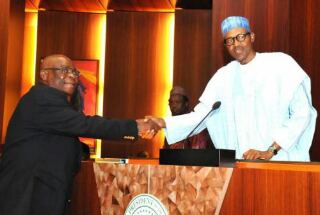 ABUJA – The National Judicial Council, NJC, on Monday, thanked President Muhammadu Buhari for allowing the former Chief Justice of Nigeria, CJN, Justice Walter Onnoghen, to voluntarily retire from office, despite his indictment by the Code of Conduct Tribunal, CCT.

The legal body, in a statement that was signed by its Director of Information, Mr. Soji Oye, noted that the decision in favour of Onnoghen, was inline with the recommendation it forwarded to President Buhari on April 3.

“The President’s acceptance of the retirement is in line with Council’s recommendation to the President on 3rd April, 2019. “Council at the end of its deliberations, thanked the President for the acceptance which was in the best interest of Nigeria”, the statement read. It will be recalled that the NJC which is the organ of the judiciary that has the statutory mandate to discipline erring judicial officers, had at the end of its investigation into allegations against the former CJN, declined to make its decision and recommendations public.

The Council merely indicated that it had taken a position and conveyed same to the Presidency for consideration, saying its decision to shroud its recommendations in secrecy, was in view of the sensitivity of the office affected.

The recommendations were made after the body considered the report of a five-man committee it constituted to investigate allegations of misconduct that were levelled against both the ex-CJN and the current Acting CJN, Justice Tanko Muhammad. Onnoghen: From Chief Justice to convicted Chief Judge. However, the NJC, said it decided to refrain from considering the allegation that Justice Onnoghen failed to declare his assets, saying it would amount to subjudice since the matter was still pending before the CCT at that time. “Council decided that the allegations relating to assets declaration that were levelled against Hon.

Mr. Justice W. S. N.Onnoghen, GCON were subjudice and therefore abstained from considering them. Muslim group wants Buhari to abolish bi-camera legislature Council reached a decision on the petitions written by Economic and Financial Crimes Commission (EFCC) and others and conveyed its decision to President Muhammadu Buhari, GCFR.

“Council also resolved that, by the nature of the decision reached, it would be inappropriate to publicise it before conveying it to Mr. President”, the NJC stated. However, barely 24 hours after the Council turned-in its recommendations to President Buhari, Justice Onnoghen, voluntarily resigned his position as the CJN. Subsequently, the CCT, in a judgement it delivered on April 18, found Onnoghen guilty on all the six-count charge the Federal Government preferred against him.

The Mr. Danladi Umar-led three-man panel tribunal said it was satisfied that FG successfully proved its allegation that Onnoghen acted in breach of the code of conduct for public officers in the country. It held that evidence of three witnesses that testified in the course of the trial, were not discredited by the defendant who was accused of failing to properly declare his assets, as well as operating five domiciliary foreign bank accounts.

The panel maintained that admission by the embattled former CJN that he forgot to declare the five accounts he operated since 2009, was “weighty enough” to guarantee his conviction. Aside giving FG the nod to confiscate all the monies in the accounts, the tribunal further deposed Onnoghen as the CJN and Chairman of both the National Judicial Council, NJC, and the Federal Judiciary Service Commission, FJSC. The embattled ex-CJN had since appealed against his conviction, insisting that he suffered a miscarriage of justice